This manual is for MMM version 2.

MMM (Master-Master Replication Manager for MySQL) is a set of flexible scripts to perform monitoring/failover and management of MySQL Master-Master replication configurations (with only one node writable at any time). The toolset also has the ability to read balance standard master/slave configurations with any number of slaves, so you can use it to move virtual IP addresses around a group of servers depending on whether they are behind in replication. In addition to that, it also has scripts for data backups, resynchronization between nodes etc.


The main functionality is provided through the following three scripts:

monitoring daemon which does all monitoring work and makes all decisions about roles moving and so on.

agent daemon which runs on each MySQL server and provides monitoring node with simple set of remote services.

simple script dedicated to management of the mmm_mond processes by commands.

Typical use cases of MMM will be described in the following two sections. 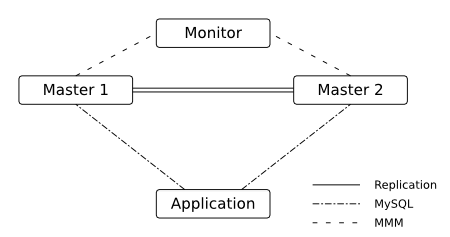 Normally (no replication failures, no replication delay etc) active master has 2 IPs (reader and writer), standby master - 1 IP (reader). In case of a failure, both - writer and reader roles migrate to the working node. 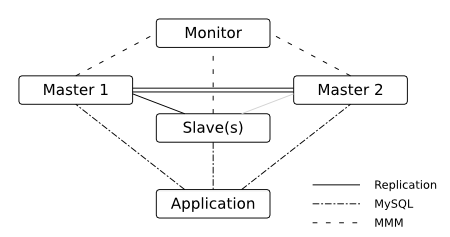 For an MMM setup with n MySQL servers, you'll need

One IP for each host (see above); one IP for the writer role; n IPs for one reader role per host.

A MySQL user with privileges REPLICATION CLIENT for MMM monitor.

A MySQL user with privileges REPLICATION SLAVE used for replication.

One should set read-only=1 in the configuration of all MySQL servers, MMM will change that to read-only=0 on the host with the active_master_role.

If you want to use the MMM tools (mmm_backup, mmm_restore, mmm_clone) you have to use LVM for the partition on which your MySQL databases and logs reside. Note: You'll need free physical extends for the snapshots undo space (see Estimating Undo Space needed for LVM Snapshot).

There are two types of roles:

Balanced roles may have multiple ips. The ips will be balanced between the hosts, so that no host has two roles more than another host.

mmm_mond performs four different checks on each host to determine if it is OK. These checks are:

mmm_mond has the ability to detect a non-functioning network connection. It regularly pings all ping_ips defined in the config. If at least one ip is reachable, the network is considered to be working.

Without working network connection mmm_mond will...

If the network connection doesn't work during startup, mmm_mond will delay startup until it's available again.

mmm_mond supports the detection of hosts that are "flapping". Flapping occurs if a host which is ONLINE changes its state to HARD_OFFLINE / REPLICATION_FAIL / REPLICATION_DELAY too often and each time gets switched back to ONLINE (because of auto_set_online or because it has been down for less than 60 seconds). This may lead to roles getting switched between hosts very often.

To prevent this mmm_mond has a built in flap-detection which can be tuned in the configuration file. If a host goes down for more than flap_count times within flap_duration seconds it is considered as flapping and will not be set ONLINE automatically. It will stay in state AWAITING_RECOVERY until it gets set online (with mmm_control set_online host).

If auto_set_online is > 0, flapping hosts will automatically be set to ONLINE after flap_duration seconds.

The monitor will remove roles from failed hosts and assign them to other hosts automatically.

Like MANUAL mode, but mode will be changed into ACTIVE mode when both master hosts are ONLINE or after wait_for_other_master seconds have elapsed.

In passive mode the monitor doesn't change roles, update the status file nor send anything to agents. In passive mode you can modify roles (unclean) with set_ip - the changes won't be applied until the monitor is switched to ACTIVE or MANUAL mode with set_active or set_manual. Passive mode will be entered if conflicting roles are detected during startup. You should then analyze the situation, fix the role information (if needed) and switch into ACTIVE or MANUAL mode. It also can be entered manually with set_passive.

If a host goes down and the agent on it can't be reached, the monitor executes a "kill host"-binary if present. You have to provide a custom binary for this which takes the hostname as first argument and the state of check ping (1 - ok; 0 - not ok) as second argument. This binary could for example:

The default location for this binary is ‘bin_path/monitor/kill_host’. This may be changed via the variable kill_host_bin in the monitor section of the configuration.

The monitor daemon may be controlled with the help of mmm_control. If you have multiple clusters, you should always specify the name of the cluster you want to work with (i.e. to check C1 status, use "mmm_control @C1 show"). Otherwise - if you have only one MMM cluster, it can be used without cluster name.

Ping the monitor deamon to check if it's still alive.

When the monitor is down:

Show the current cluster status. See States for an explanation of the different node states.

set_online is used to recover a node from a failure when it's state is AWAITING_RECOVERY or ADMIN_OFFLINE. In the following example, the host db2 was rebooted. Here's the cluster status:

All roles have been moved to hosts db1 and db3 as db2 has failed. Now that it's recovered, we should set it online:

set_offline is used to bring a node down manually for maintenance. This will remove all roles and stop replication.

set_online is used to bring the node back online again. See set_online host.

Print current mode. In the following example, the monitor is running in ACTIVE mode:

Here the monitor is in PASSIVE mode:

Switch the monitor into ACTIVE mode:

Switch the monitor into MANUAL mode:

Switch the monitor into PASSIVE mode:

Used to move an exclusive role between the cluster nodes. This command is not available in PASSIVE mode. Lets assume the following situation:

We use move_role to move the role writer to host db1:

Can be used to move the active_master_role to a host with state REPLICATION_FAIL or REPLICATION_DELAY. Use this with caution! This command is not available in PASSIVE mode.

set_ip can be used to manipulate the roles in PASSIVE mode. The changes won't be applied until the monitor is switched into ACTIVE or manual mode via set_active or set_manual.

Lines which begin with the hash character # are considered comments, and are ignored. Comments may not be included on a line after a configuration directive. White space occuring before comments are ignored.

For some variables you may specify multiple values seperated by a comma:

The configuration is divided into two kinds of sections: unique and named.


It is also possible to define empty unique sections:

Values assigned in sections named default will be used as default values for all other sections of this type.

It is possible to split up the configuration into several files and include them via include.

This section defines what roles are in the cluster and which IPs will be used for each role. Since roles are moved among servers each server needs an IP (for the monitor to talk to it) and each role needs an IP.

MMM uses Log4perl for logging, so the logging abilities are very flexible. If the default logging configuration doesn't fit your needs you can create a config file which may resist in ‘/etc’, ‘/etc/mmm’ or ‘/etc/mysql-mmm’. ‘/etc/mysql-mmm’ should be preferred.

The name of the file depends on the program you want to create it for:

Here is the default logging configuration:


In addition to that, if debug mode is enabled:


It is also possible to log into multiple files (separated by severity) or let MMM send you mails (this was the default logging configuration in versions below 2.1.1):

The buttons in the navigation panels have the following meaning:

where the Example assumes that the current position is at Subsubsection One-Two-Three of a document of the following structure: